6th Septober 5500.
Hello, my name is Maho Nishizumi I am 18 and this is my log of life at Tiger's Meadow of the faction of West Tiwado. My friend SN-P140PQ (we call her PQ for short) suggested we write a log of our time here in case anyone should ever find us. We arrived here 2 quadrums ago, there are 7 of us, aside from myself there is PQ and also SN-P985CY (CY) who are Paniel Automaton Test Subjects, Rin Tohsaka, Kasumi Webster and Natsuki Dane who are humans like myself. We also have a prisoner Sarah Simmons who is currently locked in the shower room. She is from Entinor a hostile faction, her transport pod crashed on the beach 9 days ago. She was badly injured but I managed to patch her up, I now have some familiarity with medical! Today we had lots of visitors, a group from Buttouay and a trade caravan from The Canbo Kin League. After negotiating a good price I purchased some medicine, as we only have some herbal right now and I worry we might need some.

Life is hard here and we have a lot of work to do, but right now I am so tired I'm going to rest, it is 22h and I will need to be up early again tomorrow.

7th Septober 5500.
I got up at 5am today, I didn't sleep so well as it was cold in my room, I should probably look into getting some heating, we do have a nice new electric boiler I made but right now it just provides hot water for the shower. After climbing over a pile of rice and fox meat that someone has left on the floor I had a simple meal with CY and we talked about fat animals. Rin picked up the fox meat and started cooking, although she hasn't got a passion for it she has become a capable amateur at cooking. I started sowing the rice plants in field 1 but right after I started the toilet got full and I had to go empty it, yuck. Something else I need to work is the plumbing, but right now PQ wants to collect the sludge as it can be refined into chemfuel which can be combined with phycoid leaves to make PNL fuel which the automatons use. But I need to make a biosolids refinery first, or I would if we had anywhere to put it.

On the way back I talked with CY again about hauling work and when I walked into the dinning room PQ was having a shower, oops sorry PQ. It has been like this for over a week now, since our prisoner arrived I had to move the shower into the dinning room otherwise we couldn't use it. It is a little embarrassing when someone walks in or wants to eat but we make do. CY helped me carry all the sludge out to the dumping ground. PQ was playing chess on her own again. I went back to sowing the rice in field 1.

At around 8am I went to talk to our prisoner Sarah. I told her about the future and asked her about her bravery. I gave her a chance to ask about health and told her a story about drunkenness. Not that we have had beer in a while, something else on the to-do list, a brewery!. We also talked about cooking with cauliflowers and if she would consider joining us here. She seemed a little less resistant but it looks like a long process. On the way back to the field I bumped into CY again and she was talking about barbarians. PQ was hauling in the rice that Natsuki harvested. We have run out of room in our fridge so we started using the room we built for the comms console as a temporary storage, but that is already full so PQ is just stacking up the food in the dinning room. I know I should probably expand the fridge, but I worry that we wont have the power to keep it cool, we are already at our limits. We have a wind turbine and a very cool vanometric power-cell and a single battery. The power-cell gives us 1000W all the time but the turbine is a little unreliable, right now it is giving us 616W which is not enough, the battery is going down. We really need to get our nuclear power project moving, but it needs a lot of research.

By 10am I was back in field 1 again sowing rice, Rin was helping me for a while but then she found out PQ was piling up the rice in the dinning room again and went to reorganise the comms room. She seems to think she can stack them better and get more in there. By 1130 she had given up and was back out sowing with me again. A short while later PQ came out to help as well.
At 2pm PQ went to go talk to the prisoner again and Rin was hungry so they left me to carry on with sowing the field. I held out to almost 3pm before taking lunch. I chatted with Webster about makeup and to Rin about cleaning and CY was talking about elders.

Webster went back to research, she is currently trying to figure out how to make a multi-analyzer, we need one to build more advanced projects, the next goal is fabrication. We really want to make our own components as we will need a lot for a nuclear power project and we need advanced components to make more automatons. PQ was cooking while CY and Natsuki were playing horseshoes. Rin helped me with the sowing again. Rin was talking about taming tapirs, and I spoke about salty foods and stumps.

At 5pm I decided to try to do something about the cold nights and began working on extending the heating pipes. Rin and Webster carried in some steel while PQ helped me construct the pipes in the walls and the radiators. Webster chatted about hope and terrorism. PQ took a meal to the prisoner and I had a shower while the dining room was empty. I installed some more pipes and took a break at the chess table. Just as I sat down I heard we had visitors from The Canbo Kin League again, they were not traders so I left them to it. PQ talked to me about space ships.

At 22h I realised I couldn't get the heating pipes through a section of wall that I wanted and so I had to find another route. The problem is we all currently live in a cave, the walls are rough and quite uneven, we have smoothed out most of the floor and some of the walls but sometimes we just can't get pipes or conduit through. I should be sleeping at this time but it would be another night in the cold so I'm trying to get it finished. PQ is cooking, Webster, Rin and CY have gone to bed, Natsuki is still researching.
At 23h I finally finished off the pipes and the heat started to warm the radiators. Now I'm going to bed, good night.

P.S. I'm attaching a picture of a dining room chair I made back on the 13th of Aprimay, it is a masterwork! 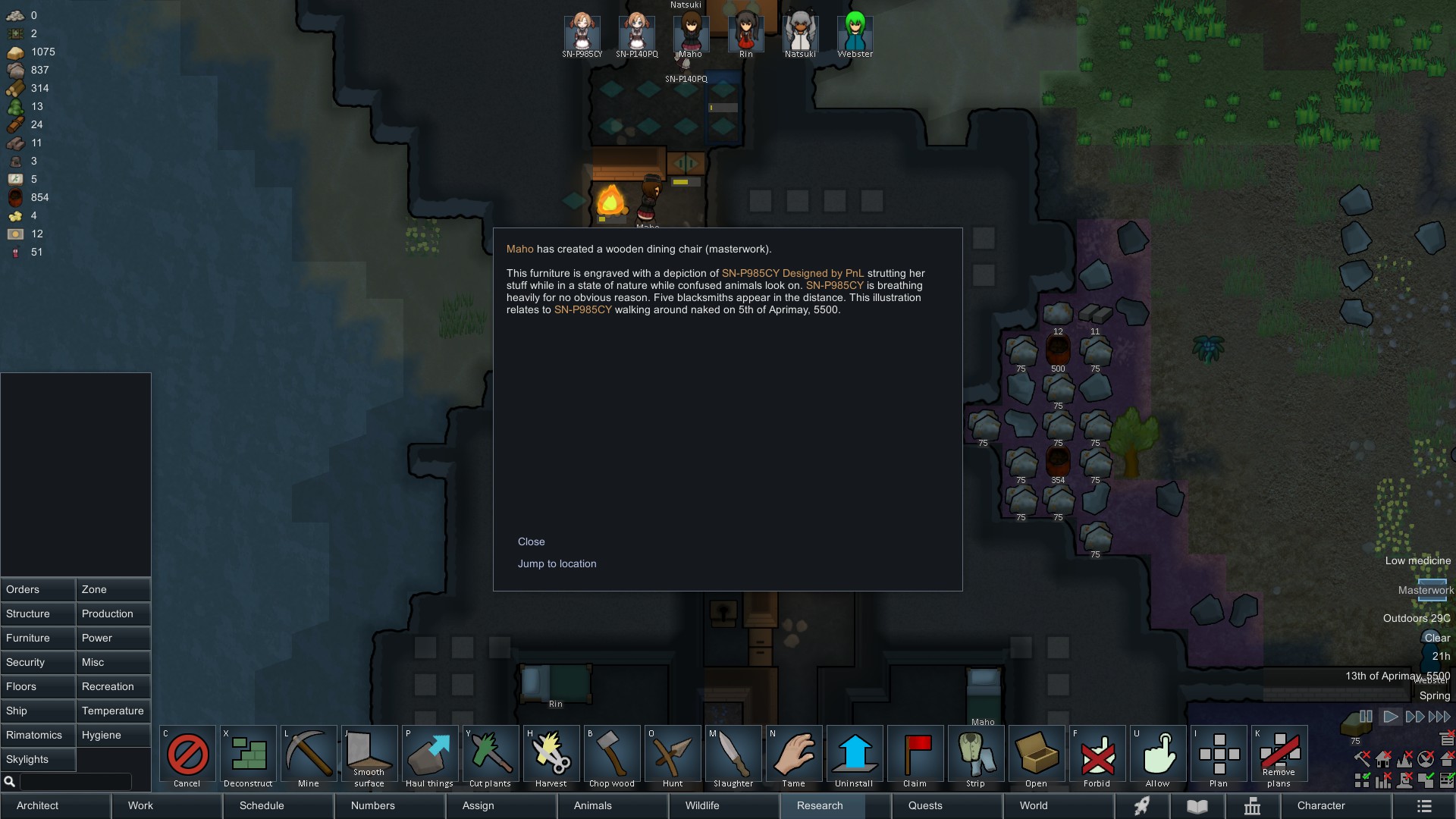 The above story is a day in the life of a character from a RimWorld play though, events and story items are generated by the game and the actions of my play through. Please let me know any thoughts on this and if there is any interest to continue it.
Click to expand...

-sama
Staff member Leader Council
You must log in or register to reply here.